The History of the Bijou Theatre 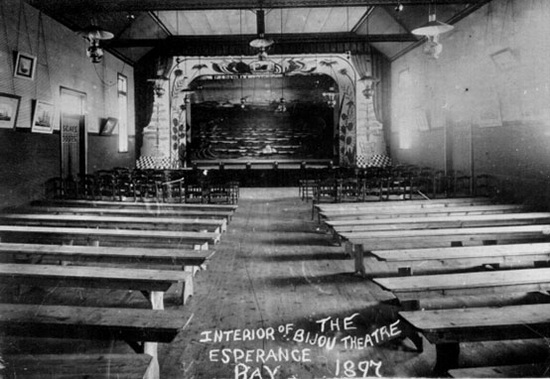 The seaside town of Esperance saw a time of vigorous growth and significant development after it was officially gazetted a Municipality on 27th September 1895. In 1896 Edward James McCarthy built a two storey general store and next to it the Bijou Theatre.

Mr McCarthy managed both concerns on behalf of the Esperance Land Company. The Bijou Theatre became a popular venue for the town’s entertainments. Warner’s Merry moments, a touring company, provided the first musical entertainment, which is well documented in the "Esperance Chronicle" of 31st October, 1896. 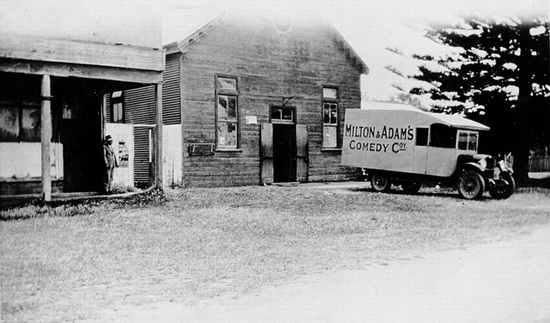 Gatherings of more serious nature also took place within the walls of the Bijou. A spirited public meeting attended by over 200 people was called as a result of provocative statements by John Cabble concerning the proposed railways between Esperance and Norseman.

A Hive of Diverse Social Activity

Over the next 30 years school festivities, stage dramas, socials, films, dancing and even roller skating, for which the original pine flooring around the perimeter of the hall was removed and replaced with stronger jarrah boards to which the skaters were restricted, ensured that the Bijou was an active social centre. 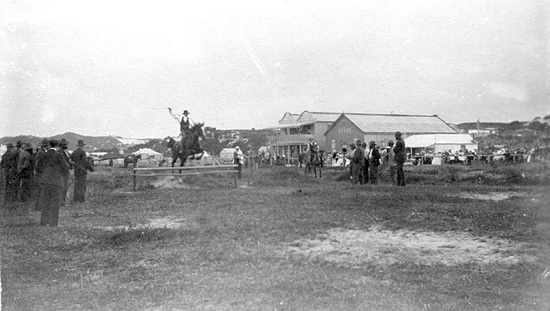 Interior fittings included brass oil lamps hung from patterned wooden beams and the ripple iron walls were decorated with pictures of sailing ships. The above clearly shows spartan seating and the stage cloths, which were used by local businessmen for advertising purposes. Large urns holding majestic Norfolk Island Pines synonymous with Esperance and other native floras adorn the painted proscenium.

The Royal Andeluvian Order of Buffaloes purchased the theatre around 1947 for use as a meeting hall. From the late 1950s to 1965 the Bijou served as the town cinema and boasted deck chair seating for the more fortunate patrons.

The opening of two drive-in theatres and the increased use of the RSL Hall, saw the demise of the Bijou. For the first time in 70 years the Bijou was idle except for the occasional RAOB meeting or social function.

In 1971 the Esperance Theatre Guild saw in the Bijou an ideal venue to lease and subsequently purchase where they could stage their plays and house their growing collection of scenery, costumes and properties. At this time the Guild was staging four shows a year and had a growing membership of over sixty.

Improvements and renovations included re-roofing the entire building, extending the stage to its present size, construction of a scene dock and the installation of tiered seating. A foyer was crested and the former dress circle became the home of light and sound equipment. The official re-opening of the Bijou Theatre took place on October 21, 1971 with the production of Noel Coward’s three-act comedy "Blithe Spirit". From that date until the present the Bijou has welcomed many visiting companies and been used by several local cultural groups. An extensive voluntary work programme over six months in 1986 saw the addition of a costume room, kitchen/workroom, indoor toilets and a new stage wing.

In the last 13 years improvements have continued with the stage being restumped and the interior repainted by the members. The original stencilling has been recreated on the beams.?In 1996, the Bijou Theatre celebrated its Centenary Year with a locally written production called "Merry Moments". Well known local actor Raleaigh Sellars, played the role of E.J. McCarthy in a show which highlighted some of the many shows performed at the Bijou over its first hundred years.

The years 1997-1999 saw another extensive building programme, with the addition of the Petite Bijou room on the North side of the building (during the construction of which, one of the original brass oil lamps was unearthed when preparing the foundations), a store room on the South side, and the complete refacing of the front of the building.  We are certain that the "Bijou" (little gem, jewel, something precious) will continue to be vital to Esperance in the future as it has been in the past.

The Bijou was formally included on the State Register of Heritage Places by the Hon GM (John) Castrilli MLA, Minister for Heritage, on 21st October 2011.